The Debate: We are REFRAMING It

Last year my friend Robbie Graham, author of Silver Screen Saucers, asked me to participate in a collection of essays he was going to collect and edit for White Crow Press, which would be titled ‘UFOs: Reframing the Debate’: An anthology in which a diverse group of voices inside and outside the UFO field would share their views and opinions on the subject, in a non-dogmatic, iconoclastic kind of way.

It was quite the challenge to say the least. Robbie was asking the contributors for a 7,000-word essay referring to the subject in any way we wanted. To face that kind of a ‘carte-blanche’ can be quite daunting, as many bloggers and writers know fully well. Add to that the fact I have never considered myself to be a writer. I started to blog almost accidentally, progressing from a consumer and  commenter of someone else’s content, to a producer of content in my own right –as I discussed in my very first appearance in the podcast Radio Misterioso with Greg Bishop, whom I consider both a mentor as well as one of my best friends in this field.

Robbie proved to be a very magnanimous editor, which facilitated the ‘birthing’ process of the essay tremendously. He gave me plenty of time, and not having the pressure of an impossible deadline allowed me to let the disjointed ideas bumping around inside my head to coalesce into a semi-coherent form. I had been fired of my day job back then, and even though it sucked for all the obvious reasons, it actually managed to become a blessing in disguise no matter how cliched it sounds. I fully devoted myself to writing the thing, and had the chance to take long walks in order to clear my head and allow my mind to put this literary Jenga puzzle together without falling apart.

Once I finished the essay and submitted it to Robbie, I realized I also had the chance to add illustrations to the text. I’m an industrial designer by trade, but I’ve always loved drawing, and once I purchased a Samsung Galaxy tablet I’ve struggled to become a digital artist, so this was the perfect chance to both keep polishing my skills, and illustrate my essay the way I wanted it, without any risks of copyright infringements. 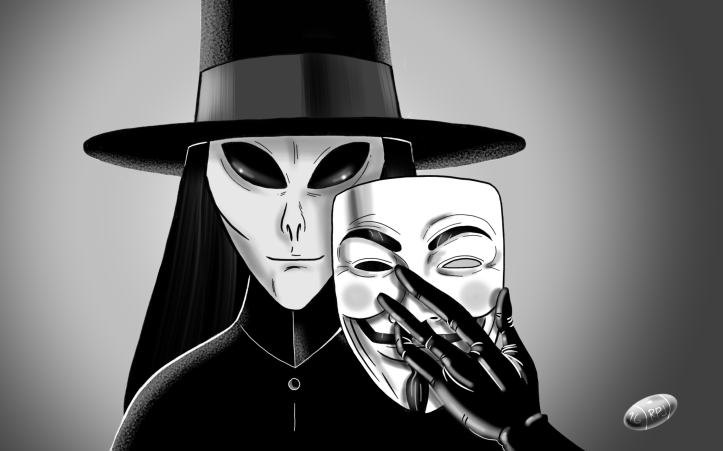 I titled this image ‘C for Communion.’ As you might have guessed –if you haven’t gotten your hands on the book already– it is a homage to both Whitley Strieber and Alan Moore. I ain’t gonna spoil it for you,, but my essay tries to portray the UFO phenomenon as a force of Anarchy, which is not as bad as it sounds if you entertain the idea that, sometimes when societies reach a level of stagnation, things need to be shaken down in order to evolve into a higher state.

But that was not the only thing I did for UFOs: Reframing the Debate. Robbie also asked me if I would be interested in designing the actual cover for the book. I had had a previous experience, doing the same for Greg’s book It Defies Language! 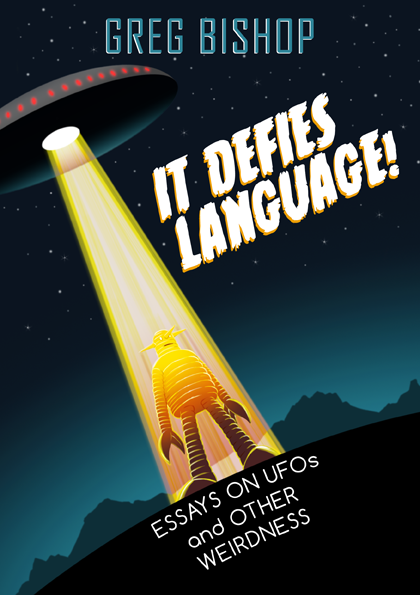 Even though I still didn’t feel as secure in my technical skills to meet the possible demands of the commission, I had a very strong concept in what I wanted to achieve with this new book: To stay away AS FAR AS POSSIBLE from the typically cheesy UFO covers plaguing the New Age/Mysticism section of Amazon. I wanted to achieve something so sleek and professional-looking, even someone with ZERO interest in the subject might have a double take after looking at the cover.

I also wanted to convey, in a very graphic way, what the book meant to me: A very original and interesting way to bring a new perspective to what already is a very fuzzy and mirage-like phenomenon–hence why the saucer in the center is made of several ‘layers’ of basic hues– which is often drowned by all the myriad of opinions looking to categorize it in a very dogmatic way, be that as ‘Extraterrestrials’, ‘Hoaxes’, ‘Propaganda’, etc. Hence the ‘word background’ which I built almost as the kind of letter soup puzzles you find in the crossword section of newspapers.

Since I had already made such a good rapport with Greg when working on IDL! I decided to add him to the work group as a sort of ‘artistic consigliery‘: Everything I showed to Robbie I CC’d to Greg too. As a result, the whole project became both a delicious (and sometimes delirious!) process, with 3 guys on 3 different countries and time zones –one of them all across the Atlantic– going back and forth, making suggestions or observations to the digital maquettes I was building with my oh-so-limited tools at my disposal.

The end result made all the hardship and frustrations worth while though, and again I can’t take full credit on it since both Robbie and Greg made invaluable contributions to it –even though sometimes they made me want to throw my laptop out the window! 😉

Once it was finished, it was just a matter of letting the good people of White Crow Press to polish the rough edges of my file –I wish I could thank them personally for it– and for Robbie to finish all the hard work of editing, correcting, proof-reading and type-setting the manuscript. And then the long anxious wait until our little iconoclastic baby kicked its way out of the press womb and gave its first wails into the ear of UFOlogy, which happened last Friday, when it was officially made available at the Amazon store.

So there you have it: The inside scoop on how I became involved in what I’m hoping will be a much-commented book both in and out our little niche of weirdos obsessed with a topic 99.9% of the world doesn’t give a rat’s ass about. Maybe it will stay that way indefinitely, or maybe things will be so radically changed in our society by a variety of other disparaging processes, that people will once again look up to the sky in wonder, and realize we still have got a looong way to go before we start to solve this whole shit about Life, the Universe and Everything.