Welcome to 2018, fellow Coppertops! I’ve already started to fulfill my new year’s resolutions, by launching a new t-shirt design on the Absurd by Design online store at Zazzle: 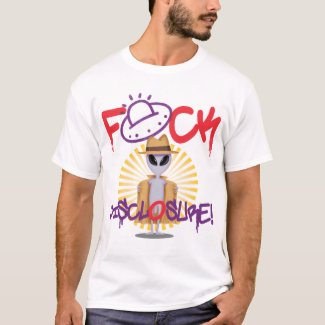 Yes, this design is a literal “F*CK YOU!” to the pie-in-the-sky dream incensantly peddled by the snake-oil salesmen of the UFO world: Disclosure.

If you’re not familiar with the term –and it bears pointing out it means different things to different people– but it’s basically the initial 10 minutes of almost every “First Contact” film you’ve ever seen: A flying saucer lands on the White House lawn, or there’s massive display of an alien presence that forces the hand of the powers that be, triggering a response in the form of an urgent press conference in which a high representative of the government –or even the President himself– finally acknowledges what any UFO buff has known all along: That flying saucers are real, and that we’re not alone in the Universe.

This is what is called “Big D Disclosure”. You’ll notice that in this scenario the official acknowledgement is a reaction of an undeniable alien manifestation –something that could not simply be debunked by the typical mundane explanations or doubts seeded by professional skeptics. UFOlogy’s snake-oil salesmen also think another way to trigger “Big D Disclosure” would be in the form of a public outcry demanding for the “truth” to come out (we’ll get back to this). That was the ultimate purpose of Steven Greer’s Disclosure Project’s press conference of 2001, and Stephen Basset’s Citizen Hearing on Disclosure in 2013.

No matter how you look at it, both endeavors ultimately failed. Both Greer’s press conference and Bassett’s faux Congressional hearing received a tepid response by mainstream media, and certainly no official response whatsoever from any authority; it did show, to be fair, that the public in general was still very much interested in the topic, despite the giggle factor still permeating it in the eyes of societal institutions –here I’m referring to the perception of UFO’s in the United States, the UK and most Western nations, yet THERE ARE NOTABLE EXCEPTIONS: Among the countries in which governmental institutions take the matter seriously in an official capacity are France, Chile and Peru –and obviously, many nations have conducted secret programs to study the phenomenon, e.g. when the Brazilian Military were forced to investigate attacks suffered by the terrorized population of Colares, caused by an unknown presence.

So Basically, Disclosure if the “I TOLD YOU SO!” wet dream most of us have fantasized of, at one point of another…

But just like any adolescent sex fantasies, with the maturity that comes from experience and more knowledge, one SHOULD realize Disclosure is both unlikely and unrealistic on so many different levels. My good friend and colleague Robbie Graham –author of Silver Screen Saucers and editor of UFOs: Reframing the Debate— was once an ardent proponent of UFO Disclosure, yet with time (and maaaaybe a little coaxing on my part) he started to change his opinion, until finally he wrote a fantastic editorial on his now-defunct blog, which I commented upon on The Daily Grail. Here’s an excerpt that perfectly captures why Disclosure is one of modern UFOlogy’s folly:

Need more convincing? Here’s a video of Robbie’s presentation at the ‘UFOs and the Media’ conference organized by Exopolitics Denmark in 2014, in which he expanded upon his initial “Disclosure Movement RIP” editorial:

Earlier this year, both Robbie and I (along with our colleagues Micah Hanks and MJ Banias) were interviewed by Mysterious Universe on occasion of the Reframing the Debate’s launch. Robbie mentioned his change of heart with regards to Disclosure, while the rest of us discussed our essays included in the anthology. My own contribution –“Anarchy in the UK!”– replicated many of the arguments presented by Robbie in 2014, along with musings on my own with regards on how the tricksterish nature of the UFO phenomenon runs counter to how nations like to conduct themselves. To think a government, ANY GOVERNMENT, would be willing to officially acknowledge there’s a unknown presence in our midst to which they are completely powerless and incapable of controlling –and to add insult to injury, that it behaves in irrational and unpredictable ways– is to me, like I said before, nothing but a fantasy.

Not only that, it overlooks one of the most important aspects of the phenomenon itself: THE WAY IT CHOOSES TO INTERACT WITH US. Not from the top-down like everything in our society tends to be, but from the bottom-up. A grassroots type of Contact, if you will.

UFOs are NEVER going to land on the White House lawn, the same way they are not going to land on the Kremlin’s Red Square, or in front of the headquarters of China’s communist party. They are choosing instead to land on YOUR lawn, or on the square of some small, unimportant town in Russia like Voronezh.

Why? Nobody can say. I myself suspect because that is the most effective and efficient way to influence a society while causing the least amount of disturbance to its fundamental structures –there’s no point in prematurely collapsing what you’re trying to alter. Sure, it may not be ‘efficient’ from OUR point of view, because it seems to be taking too damn long! But like I said on my RTD essay, just like a sufficiently advanced technology is indistinguishable from Magic, the behavior of a sufficiently alien intelligence would be indistinguishable from Madness –and if you are not unhinged by the ‘normal’ constrains of Time and Space like we are, then you have all the Time in the world(s)…

Make no mistake: Things ARE changing in the UFOlogical and global landscapes: The New York Times keeps publishing favorable articles on the topic. and NOBODY –not even me– could deny this is an unprecedented development. Some people might argue this is a sign of what is called “Little D Disclosure,” in which instead of the Hollywood-esque scenarios suggested by “Big D Disclosure” which we’ve been discussing above, what we get is a drip-by-drip release of information in order to acclimatize the public into the accepting the reality of the UFO phenomenon, in order to prevent a fatal destabilization.

One could argue the response caused by the revelation of the secret Pentagon program run by Bigelow –the markets didn’t crash, there’s been no protests or mass suicides– is a sign that the acclimatization process is working. But I suspect the global ‘Meh’ reaction to these news has more to do with our postmodernist, post-fact numbness caused by the constant onslaught of information which 15, 10 years ago would have made the eyes of the entire world to turn and take notice, but in 2017 they barely made us to bat an eyelash and hit the RT button –Just keep this in mind: In 1999 the Columbine massacre became GLOBAL NEWS and was covered FOR MONTHS by all sorts of international publications. Without Googling it, would you be able now to recall how many mass shootings happened in the United States during the past year alone?

(Also, would you have believed in 1999 that Donald Trump would become president?)

Even if the Pentagon Program revelation is a result of a “little D Disclosure” effort by a secret faction within the government, it is still something we should flip the bird and shout “F*CK YOU!” to. Because it would be an attempt from the people on the top to control the narrative, and put themselves as intermediaries between the phenomenon and Humanity. And I suspect –or hope– that is not what THEY –you know, the ones in control of the UFO phenomenon… whoever or whatever they may be– intend to do.

I rather suspect their long-range influence and meddling with our civilization is aiming to disregard ANY middlemen and intermediaries. They seem to be open to have a direct interaction with anyone who is willing to risk it –whether that is a WISE decision or not, would be a matter for another blogpost…

When you see a major news outlet –or even the President himself– acknowledging that UFOs are real, and the public response is not “So what? we have other things to worry about!” like what we are seeing right now, but is instead “So what? we knew about it all along!” then you and I will finally realize the Times have truly a-changed. Forever.

…But in the meantime, I invite you to put on my “F*CK Disclosure!” t-shirt and flip the bird to snake-oil salesmen, shadowy disseminators of Disinformation, and the useful idiots that would rather dance mindlessly to the drum others beat, than seek an unfiltered interaction with the Other.

Remember: Gnosis has no substitute.

(And if you attend the International UFO Conference wearing it, please send me pics!)