After a very prolongued hiatus, I decided to release a new t-shirt design in my Absurd by Design Zazzle store.

The reason for the long delay is simple: I became very disappointed at the low success I saw with the previous designs. I felt it wasn’t worth trying to come up with something new, if the most I could get out of people on social media was a “Like”, a “Want!” comment, but not an actual interest in purchasing the damn shirts.

Lately I started to think I needed to change my focus with Absurd by Design. I began to worry my concepts were too “inside baseball” which would only attract a very small niche of Fortean enthusiasts –which wouldn’t be that bad, if not for the fact that such a niche group is either dirt poor, or not brave enough to profess their uncommon interests in public –there’s a reason why the early years of the Internet became the perfect breeding ground for UFO communities, given the blanket of anonymity provided by the world wide web.

That’s why I chose to come up with a design that would appeal to either hardcore Forteans who know all about the multiple sightings of winged humanoids with glowing red eyes, or to people who are just looking for a badass thing to wear at a bar or a rock concert.

If you’re in either of those camps, you can purchase and customize your own t-shirt by clicking to this link. 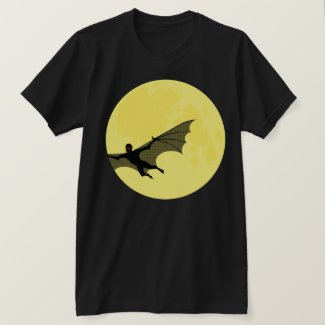 I’ve got another interesting idea for a shirt in the works –something fun and cute, instead of dark and metal– that I want to release next week. Here’s hoping this new angle will finally see the Absurd by Design brand off the ground.