I’m continuing with my idea of creating merchandising that would be appealing to a broader spectrum of people, instead of the (rather small, it turns out) niche of individuals that have a deep interest in Fortean phenomena –or are brave enough to display said interest in the public, instead of using the refuge of Internet anonimicy.

With that in mind I created this design, in hoping that it would interest both UFO people and cat lovers in general. I was told by a close friend the illustration was “equally creepy and adorable” which is exactly what I was aiming at.

I know the concept is not 100% original, but I think the execution of it is, and I also sought to put a few interesting elements here and there. I liked giving the Gray a ‘blob’-like head instead of the more realistic ‘inverted tear-drop’ cranium. Also if you look closely you’ll see its skin is not really ‘gray’ but its a light lavender. The ‘bug’ eyes also work nicely IMO, and are more interesting than the ‘canonical’ black eyes –although I do seem to recall that in a trance-like session Whitley Strieber described the eyes of the being that appears in the cover of Communion as having a ‘texture’ like that of insects, and that the eyes would ‘sink in’ or ‘deflate’ inside the socket when the being blinked.

Here’s the link to the men’s t-shirt: 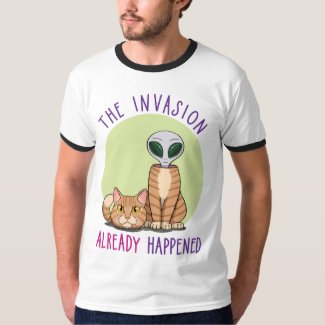 And the link to the women’s t-shirt: 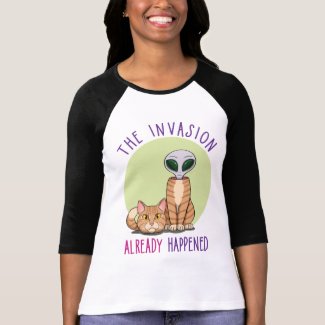 The Invasion Already Happened (Is my Cat an Alien? T-Shirt
by AbsurdByDesign

Please remember that Zazzle allows the client a great deal of customization. You can choose from a great variety of shirt designs, colors and sizes.

I also made a coffe mug, in case wearing t-shirts is not really your thing: 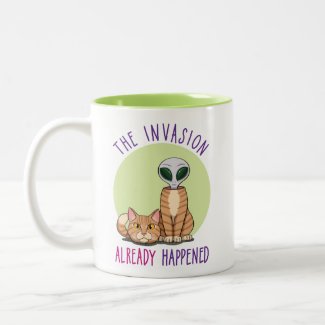 Hope you get to buy some merch with this new design. I’d also appreciate it if you shared these links with your contacts 🙂

And stay tuned for more Absurd by Design goodies!